Achievement of Arms are a period way to show off one’s accomplishments in the SCA, as combined with one’s heraldic device.  I had the great fortune to create a conjugal coat of arms for my Byzanbestie Anna and her husband Gieffrei, and ended up also blogging the process, too.

Let’s start off with the details and definition of what a heraldic achievement of arms actually is.  An ‘achievement’ is a full formal display of a coat of arms. This form of display is normally used in very formal situations, and can be used for decorative elements, banners, and of course, on scrolls. An achievement is one’s heraldic device surrounded by all the extra elements accorded to an individual by their rank in the SCA according to their kingdom’s sumptuary laws. Most of the elements, however, are optional and do not have to be displayed.  Further bits of interkingdom anthropology: Ansteorra registers heraldic achievements – other kingdoms might not (mine does not).  Check with your local herald before you decide to start on your own.

Achievements consist of individual elements coming together in one full heraldic-a-go-go display.  These items are as follows:

Remember how I said that achievements are period?  They are!  Check out this example from St. George’s Chapel in Windsor Castle, which displays the names and arms of the Knights of the Garter in their own personal chapel stall.  This enameled example belonged to Walter Blount, 1st Baron Mountjoy (c.1416-1474), and the extant plate dates to 1474.  It’s enameled brass, and you can see a crest (the horns), a coronet, a helm, mantling (the Cthulhu/squid-like item surrounding the arms), escutcheon (the shield), and label (the name on the scroll).

So, for Anna and Gieffrei, I went a little bit more Anglo-Norman for their conjugal arms.  Anna and Gieffrei both have late 11th century personae, which mean that heraldry displayed in this manner is a bit late for them, but, as Anna basically said “I trust you.  Go crazy,” I kind of did.

I started by pencilling in everything on pergamenata (purchased from John Neal, Bookseller). Anna wanted a Byzantine double-headed eagle and an alligator for her supporters, so I used one of her badges [(Fieldless) A crocodile tergiant fesswise contourny sable gorged of an antique coronet Or] as inspiration for this supporter.  Gieffrei got a silver dolphin (he’s a Navy Chief outside of the SCA) and a Norman lion.  Anna went on the dexter side.  Normally, the male spouse would go on the right (that’s stage right for you non-heralds out there) to indicate that he is the higher ranking of the two, but hey, this is the SCA – Anna outranks Gieffrei, so her device went there.

Once I got everything sketched down in light pencil the way I wanted it, I started laying in flat colour with the gouache I had.  I, admittedly, bounced around a bit.  I started on Anna’s escutcheon, then her gator, then over to Gieffrei’s shield and, well, all over the place, but I started with the lightest colours (white, really) first, using Holbein’s Zinc White.  Normally, I’d add a bit of black to tone out this white so I’d be able to build dimension later and could add a bit of a permanent white (which can be used to paint over existing colour as the pigment is ground a wee bit more fine and doesn’t muddle into the underground colour as much), but it was fiddly and I skipped doing this, though, I did use a more charcoal-coloured grey for her dolphin to give it a bit more dimension and shading.

After the flat colour painting came the shading.  Now, when I laid down the flat colour, I tried to lay down a midtone so that I would have room to add lowlights and highlights, but also to keep the piece from appearing too dark or light. Gouache is an opaque watercolour, and can be quite forgiving about certain things, but there comes a point when no amount of globbing a lighter-coloured paint onto a darker-coloured object will save it, so start in the middle and add your highlights and lowlights carefully.  I also laid in my metallic paints (which are made by FineTec/Coliro, and can also be purchased at John Neal).  Anna’s eagle and her coronet, as well as Gieffrei’s Norman nasal helmet and dolphin both got the metallic treatment. The nice thing about using these particular metallic paints is that they can be mixed with gouache for any additional shading.  They are very shiny and very sparkly, as they have mica mixed into the pigments.  (I’ve used by FineTec/Coliro and Kuretake’s Gansai Tambi Starry Colors, and I have to say that I really like the FineTec more – it just pops off the page and mixes so well with the gouaches I have on hand, plus it’s incredibly pigmented.  Your mileage, of course, may vary.)

Of course, this is how most of the painting went.   I spent the better part of a day adding in colour, then low- and highlights until I got things to a place where I was happy with them. Details like Anna’s coronet were done to really make the piece personal to the owners of the achievements, and I am pleased that Anna is happy with the completed piece, which consists of the escutcheons, mantling, torses, supporters, a helm (his), a coronet (hers), a compartment (with their favourite flowers of tiger lilies and forget-me-nots), and their mottoes in Greek and Latin.

I did paint in their mottoes – after all, I had already laid paint down on the scrolled paper-looking thing, and this paint would wreak havoc with my pen nibs, so I brought out my trusty and beloved 20/0 Monogram brush from Princeton Brush Co.  The bristles are long enough to hold a decent amount of paint, but it’s a small enough brush to be able to see the things you’re painting.  Anna’s was done in Greek, using a translation she provided, and Gieffrei’s was in Latin, using a 12th c proto-gothic hand.  Doing calligraphy with a brush has its own sets of challenges, but by going slowly and methodically, I was able to complete this. Unfortunately, I didn’t get Gieffrei’s motto centered exactly, so this is my big regret with the appearance.  (there’s always something that I’m less than happy with in everything I do.  It is usually best to look at it, sigh, and learn from it, and then let it go.)

The completed achievement is still one of the biggest I’ve done at 11″ x 14″ – I usually work much smaller as there’s less of a chance that I’d smear something, being a lefty.  On the other hand, working on this size allows for a bit more detail in the finished piece.  And my clients are happy.  And when they’re happy, I’m happy.

So, what’s next?  Well, not much. Admittedly, I’ve been working on some modern commissions lately (money is good!  It means I get to show up to hang out with my medieval friends), but this particular piece really was a lot of fun and reminded me why I love heraldry so much.

5 thoughts on “Achieve!, or the Diary of making an Achievement of Arms”

This site uses Akismet to reduce spam. Learn how your comment data is processed. 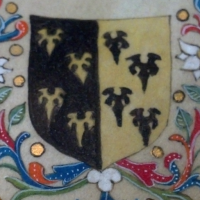 A blog about sport, maths and science.

A Caerlaverock Roll of Arms
Not Another Costuming Blog

A tiny obsessive perfectionist sewing her way through history

trying to bring the old into the new, one small step at a time

Inn of the Tyger
Scilicet

It is permitted to know.

In Pursuit of Medieval Excellence

Musings of a modern diviner

the Projects and Pursuits of Finnguala ingen Néill meic Chuircc

there is a whole other world behind your eyes ...